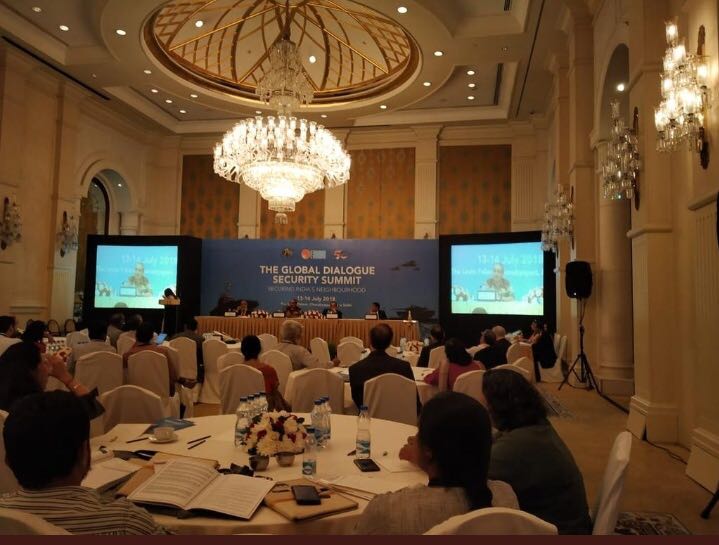 That the Indo-Pacific has attained great significance in international relations was evident at the Global Dialogue Security Summit held at the Leela Palace, New Delhi on 13-14 July 2018. Academicians, reps of think tanks & government and military men, from parts of the world, gathered to discuss this and other topics on Global Terrorism and Defence Industry with special reference to India. The two day summit was organised by Global Dialogue Review in partnership with Konard-Adenauer-Stiftung and Nelson Mandela Centre for Peace and Conflict Resolution.

The session at the Global Dialogue Security Summit underlined the huge economical potential of Indo-Pacific and India’s policy of peaceful neighbourhood in face of global challenges of terrorism while also being seen as a major figure in the region.

The Changing Nature of Warfare

Warfare has seen tremendous changes since World War I and has brought in new technologies of cyber warfare , drones, Artificial Intelligence and robotics. Whether artificial Intelligence can replace humans is debatable. These have thrown up challenges for nations to protect themselves against unconventional attacks.

“We need to build pictures of the future at different point of time so that we can come back to build capability for it” – Mr Pratyush Kumar #GlobalDialogueSecuritySummit #SecuringNeighbourhood #Warfare pic.twitter.com/ELNL93kfLt

Security Challenges in the Indo-Pacific Region

The #IndoPacific term has a growing strategic, political and economic significance on the region. Given its evolving nature, the panel with @shekhar19541 as the chairman discusses the security challenges. #GlobalDialogueSecuritySummit #SecuringNeighbourhood pic.twitter.com/t2SO4hy8w5

The growing importance of the region is leading to new alliances, strengthening of the old and new interest by powers like Russia, Australia and the EU.

A free and open strategy is emerging even as the world grapples with other issues of terrorism, healthcare, natural disasters and economic exploitation.

Overcoming the Threat of Global Terrorism

If the good news is the decrease in causalities and deaths due to global terrorism, the bad news is about how social media has aided terrorists. Global terrorism is taking new shape; and counter tactics would need to change accordingly.

“The user and the suppliers should be brought closer to generate an understanding for the need of Make in India”, says Lt Gen Ravi Thodge.#GlobalDialogueSecuritySummit #SecuringNeighbourhood #MakeInIndia pic.twitter.com/JlYniGftLe

The Global Dialogue Security Summit put forth: India has to convert from being a major importer of defence goods to manufacturing them.

“The ecosystem built around a joint venture depends on a number of factors, a long-term true partnership being the most important one.”
-Mr. Yonatan Yaron#GlobalDialogueSecuritySummit #SecuringNeighbourhood #MakeInIndia pic.twitter.com/nvuKrOH5BD

Taking inspiration from countries like Israel while encouraging startups and MSMEs as part of “Make in India” can be the way forward.

India has great manufacturing potential that it should take forward, by also stressing on R & D. India can emulate those countries that develop the entire assembly for aircrafts.

The Global Dialogue Security Summit concluded that the interest in Indo-Pacific has been dynamic, with major powers in the forefront. Then, the way forward is peaceful co-existence.